The sounds of thunder 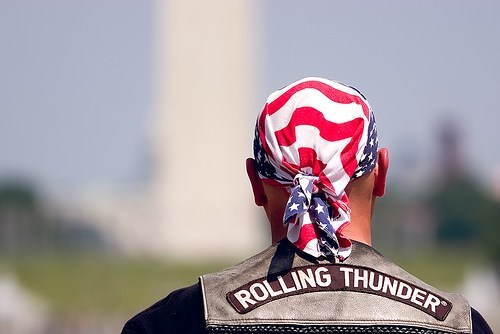 For more than 30 years, he had been waking up at 5 a.m. It didn’t matter which time zone he was in or even if it was daylight savings time. When the big hand was on the 12 and the little one on the five, he was awake.

He crawled into the shower and lay there for 30 minutes, letting the hot water loosen up his muscles and numb the throbbing pain of too many arthritic bones.

But the water limbered him up enough to pull on some faded bluejeans, t-shirt and leather vest. It took some effort to pull on the boots, but he managed. Then he strapped on the leather chaps. Three cups of coffee and several accompanying groans later, he headed into the garage where she was waiting.

She didn’t get much use these days, but she didn’t complain. Instead, she waited patiently under the tarp, waited for Memorial Day weekend to come around, knowing he would polish her up and head out onto the open road.

He worked for the better part of two hours, polishing the chrome, checking the oil level and the tire pressures. Then he kicked loose the stand, fired her up and headed into the morning air.

Not much traffic on Arlington’s Washington Boulevard on a Sunday morning. A few cars. Some slowed to take a look at the gleaming Harley Softtail. Few noticed the gray-haired, middle-aged rider. He nosed into the parking lot of Bob & Edith’s Diner on Columbia Pike and parked besides a half-dozen other Harleys. He noticed two he expected to be here weren’t.

“Afternoon lieutenant, did we sleep in this morning?” After 30 years and they still called him by the rank they knew him by then.

“You know me chief. Just couldn’t get up.”

“We weren’t sure you would make it. Heard you were hard down.”

“Will be in about two weeks. Go under the knife on 12 June.”

Damn. Each year, the list of those who don’t make it got longer. He’d hauled Crowder on his back through more than 10 clicks of jungle. He’d miss him.

“Laid the bike down on ’50 in Indiana three months ago. DOA.”

Well, at least it wasn’t age. Or maybe it was. A younger man might have survived.

For the next 90 minutes, they ignored the ravages of age and worries about cholesterol and hardened arteries, wolfing down pork chops, bacon, eggs and hash browns, talking about days that have long since passed.

“They say we will have a quarter million out today. Maybe more than a hundred thousand bikes. Kinda miss the old days when there only a few hundred of us.”

“Yeah, at this rate, there will be more out there than who actually served. Getting hard to tell the wannabes from those who were in the shit.”

“I can tell. Always could.”

“Hey, remember the guy who showed up last year with the Vulcan? Thought he was gonna get killed. Bringing a Jap bike to Thunder. Ain’t right.”

“Saw some Jap bikes on the way in this morning. Some German ones too.”

They finished and headed up Columbia Pike to the Pentagon, joining a mass of bikes and the thunder of unmuffled exhausts in the parking lot. He opened the saddlebag and pulled out the same American flag and black POW-MIA flag he had used for the past 11 years. Along with his Boonie hat. At least it still fit.

An hour later, they were in line, pulling out, headed for the Memorial Bridge and the Mall in Washington. Rolling Thunder was under way.

He’d been on the first one, more than a decade earlier, a much smaller group of Vietnam vets riding their bikes into Washington to protest the U.S. government’s inaction on resolving the nagging issue of what happened to too many American servicemen who were unaccounted for Prisoners of War or still listed as Missing in Action.

Back then, the local law refused to cooperate and the veterans groups looked askance as the mostly long-haired group of motorcyclists who looked more like Hell’s Angels than veterans of a forgotten war.

But Thunder had grown through the years, along with the awareness that Uncle Sam had not done right by those left behind in Southeast Asia. The longhairs were still there, the heart of the movement, but Thunder now included bank clerks, accountants and the widows and children of men who were left behind. Now they got police escorts and the Vets groups were more tolerant.

As he crossed Memorial Bridge, a number of those in the crowd stepped out to slap the hands of those coming in. A young woman handed him a small American flag. He stuck the flag in his handbrake.

They circled the Mall before parking and heading to the Wall. Officially, it is called the Vietnam Veterans Memorial. But those who were there just called it the Wall. It takes a while before some Vietnam vets can go there. Some never get up the nerve.

It took Rolling Thunder 1 to get him to the Wall. Afterwards, he was sorry he had waited so long to go.

He walked the length, scanning the dark service for names he knew. He always found them, even when he didn’t want to. One who died next to him. A young man who had one day to go when a mortar round took him out. Another who was already dead when they arrived to extract him. Names and faces that were still clear in his memory after 30 years.

He knelt and prayed with his buddies before leaving. Then they rode back across the Potomac and visited Arlington Cemetery to say hello to some others who didn’t make it.

People looked at the small group of gray-haired men in their motorcycle leathers and gave them a wide berth, not sure of what brought such a dangerous-looking group out to a place of honor on Memorial Day weekend. But it didn’t take long for the rough-looking crowd to quickly outnumber those in their Sunday best.

Later, they sat at Hard Times Café in Arlington and wondered how many more Rolling Thunders it would take before the federal government finally did something.

“How much longer we gonna keep doing this?”

“Until we get some answers.”

He wheeled the Harley back into the garage, listened to it idle for a few minutes, and shut her down, covering her with the tarp.

Once inside, he unstrapped the leather chaps, took off the boots, and put them away.